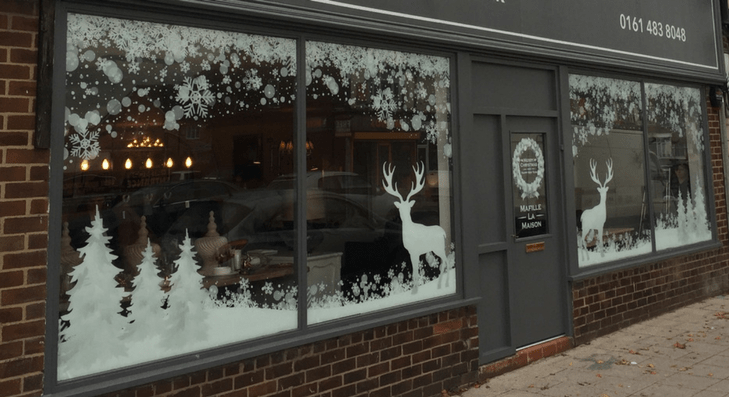 At this time of year, two of the retail world’s biggest opportunities collide and combine to create a perfect storm of promotional creativity. And what are these opportunities? Why, window displays and the run-up to Christmas, of course…

This year, department store Selfridges became the first to launch its festive windows, on 20 October. And if you think that’s early, you’ll be shocked to know that the store’s flagship Oxford Street branch in London launched its in-store Christmas shop in July – a whopping FIVE MONTHS before the big day itself.

While not every retailer is ready to unveil their particular festive spirit just yet, many have been planning their displays for months and are preparing celebratory window graphics, fabric backdrops and merchandise presentations for a big launch during November or early December.

A Christmas window display provides the ideal opportunity to promote potential gifts, offers and more, as well as making consumers feel cheered and welcomed – so it’s a chance that retailers can’t afford to miss.

It’s hard to imagine, but shops didn’t always have large window displays. Shopkeepers would stand in doorways and try to encourage people to come inside – which passers-by often found rather annoying.

So, when plate glass became more easily available in the late 19th century, retailers jumped at the chance to present their merchandise to the high street and tempt consumers with aesthetic features instead. In New York, department store Macy’s revealed an impressive display for Christmas in 1874 and was quickly followed by numerous competitors.

In the UK, Selfridges & Co was founded in 1909 and immediately made its mark in the visual merchandising world. As well as fashionable products, the London store used its window displays to share war news with the public – first for the Balkan Wars in 1912-1913, then a dedicated ‘War Window’ for the First World War between 1914 and 1918.

Further innovations included mechanisation to create moving displays; and creative use of electric lights – as well as commissioning well-known artists to contribute distinctive designs, particularly in the 1930s and 1960s.

With the rise of digital media, it’s become tougher to capture the attention of consumers, many of whom will often walk down the street staring at their smartphone screens rather than at the shops they pass.

It’s therefore more important than ever for retailers to make sure that their window displays possess the maximum engagement potential for shoppers.

For this, ultimate clarity of messages is important, along with photogenic – or rather, Instagram-able – creativity in both merchandise and graphics.

These benefits can be delivered by contemporary products such as:

Used in harmony with retail displays within the store, these products can help create a magical festive journey for the customer, enticing them inside before inspiring festive purchase decisions.

We all know how stressful Christmas shopping can be, so a bit of clear signage and well-presented gift merchandise can go a very long way at this time of year.

Want to make a big impact with your Christmas window displays? Cestrian’s expert retail team can help you with creative ideas, vibrant graphics and lots more. Simply ask us for advice.

For any retailer, windows are like billboards for your stores. If used effectively they can persuade customers to enter ...

For any retailer, windows are like billboards for your stores. If used effectively they can persuade customers to enter ...

Where are your cus...

SIGN UP TO RECEIVE MONTHLY PRINT
KNOWLEDGE & INSIGHTS FROM CESTRIAN.

SIGN UP TO RECEIVE MONTHLY PRINT
KNOWLEDGE & INSIGHTS FROM CESTRIAN.

TOP
Copyright © 2019 Cestrian Imaging Limited
TOP
Copyright © 2019 Cestrian Imaging Limited
Call Now Button
Cestrian uses cookies to improve site functionality and provide you with a better browsing experience. Detailed information on the use of cookies on this Site, and how you can decline them, is provided in our cookie policy. By using this Site or clicking on "OK", you consent to the use of cookies. OK Read More
Privacy & Cookies Policy
Necessary Always Enabled